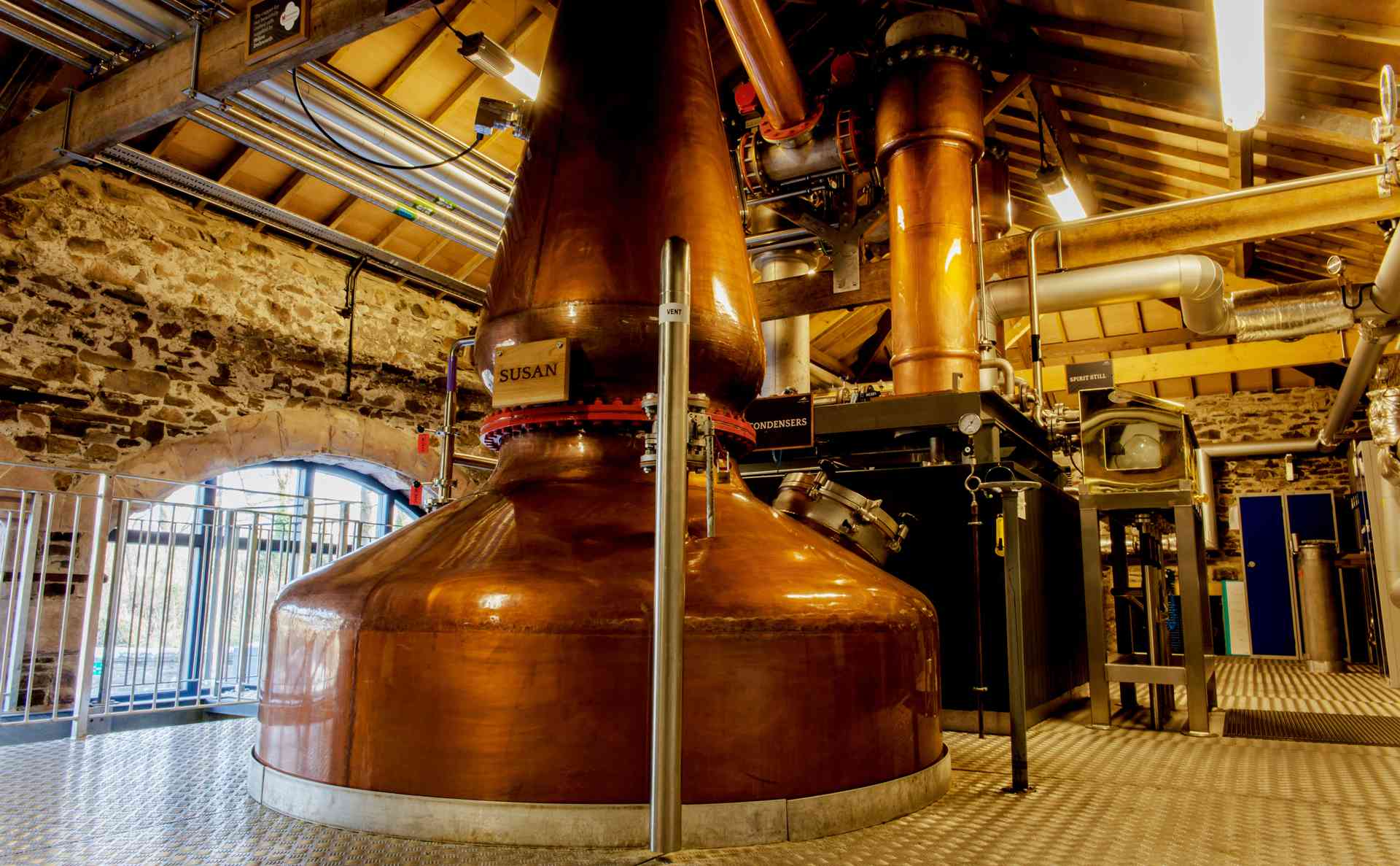 Stills in the production area

Whisky, Vodka, Gin and a Cruise

This full day, all-inclusive tour will take you to the north western Lake District for spectacular scenery, a boat trip on the second largest lake and a fascinating tour and tasting session at the award willing Lakes Distillery.

Your day starts with a climb, all the way up to the Kirkstone Inn, the highest inhabited building in the Lake District, for a stop to take in the views back down the valley right the way down to Lake Windermere and Ambleside. This once important coaching inn sits almost at the summit of the Lake District's highest pass that is open to motor traffic.

Here you join a 1 hour cruise on Ullswater to relax and see the stunning fells as the boat cruises the full length of the lake.

You now rejoin your minibus as we leave Ullswater and head north and west towards Bassenthwaite Lake to The Lakes Distillery. This is an award winning distillery that produces Whisky, Vodka and Gin.

Located next to Bassenthwaite Lake in the Lake District National Park, an 1850'S Victorian model farm has been renovated to be home of the Lakes Distillery and their World Class Spirits.

Model farms were designed to be beautiful as well as functional and the Lakes Distillery buildings are certainly beautiful, ideally suited to their needs. Each one has been carefully and sympathetically adapted, preserving the character and history of the old, stone-built barns and sheds.

The main barn houses the mash house and still house, with their unique stills, carefully designed to produce the spirits. An old cattle shed has been converted into the warehouse, with further cattle sheds being transformed into the shop, bistro and bar. The Distillery think that Joseph Christopherson, who farmed here in the 1850's, would have approved. Perhaps he even had an illicit still at the farm?

A lot of thought has gone into the production process at the Lakes Distillery to ensure a malt whisky of outstanding quality is produced and one of the finest gins and vodka available in the UK. The plant has been carefully designed to the highest specification, and the copper stills have been made to unique designs, on a small artisan scale, meaning the spirits can be lovingly prodcued without the need of mass production.

There are now distilleries producing whisky across the British Isles, and this has led the Lakes Distillery to create an entirely new concept in blended whiskies - a British Isles Blend, The ONE.

The Lakes Vodka, the first ever Vodka to be produced in Cumbria, is produced in the traditional way. Lovingly crafted in the small handmade copper pot still, which maintains its delicate aromatics and flavours.

The Lakes Gin is a Cumbrian Gin, made with with local botanicals & distilled in the Artisan Still.

Made very much on an artisan, small batch scale, it will be lovingly created in the small 1,000 litre still, prefectly designed to produce an outstanding spirit.

There is plenty of time for lunch in the Bistro at the Distillery. Set in a former Victorian cattle parlour, the Bistro's surroundings and inspirations are reassuringly solid, natural and rooted in the Lake District. This is reflected in their food; honest, generous and full of flavour. One of their main goals is to embrace the spirit of the Lake District. They achieve this by using regional ingredients where possible and having a key focus on freshness, flavour and simplicity.

Next, you will be taken on a guided tour of the distillery itself. After the tour you will be given the opportunity to taste a sample of each of the Whisky, Gin and Vodka produced here with expert guidance and a detailed explanation of each of the spirits. You will also be given a £5 voucher each that can be used to purchase any 70cl bottle in the shop on the day.

You now head back towards Keswick and start the return journey to the southern lakes. On the way you will pass Thirlmere, and at the foot of the water, you then head over the mountain pass of Dunmail Raise.

Now the road drops steadily down from the fells and before long, we pass Grasmere village to drive along the shores of Grasmere. William Wordsworth lived here at Dove Cottage and as we continue on, we pass Nab Cottage, the home of his friend and author, Thomas de Quincey. The road winds along the shore until we come to Rydal Water. The water here is often mirror-like still with beautiful reflections of the surrounding fells. We pass Wordsworth's last and favourite home which is situated off the road at Rydal as we return to Ambleside for the first of our drop-off points.

More Details about the Places on the Tour 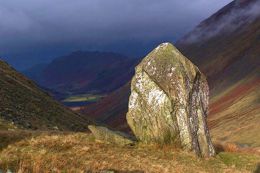 Kirkstone Pass with an altitude of 1,489 feet is the Lake District's highest pass that is open to motor traffic. The Kirkstone Pass Inn stands close to the summit of the pass. Formerly an important coaching inn, it now caters primarily for tourists and is the third highest public house in England.

Near the top of the pass is Kirkstone Quarry (below), where rock extraction and architectural stone production took place over 500m above sea level. Further production facilities for bespoke items such as work surfaces, head office and trade showroom were located at Skelwith Bridge near Ambleside. The main materials mined were green and blue-black slate. The former, a unique composition of volcanic material layered down some 450 million years ago, is found only in relatively small deposits within the Lake District. Intense compression led to metamorphosis into a dense and highly durable rock with great lateral strength. The latter took on a much more common geological formation, being an accumulation of dense and deeply compressed sedimentary material formed some years after the volcanic period, deep in the rifts of the earth's surface. 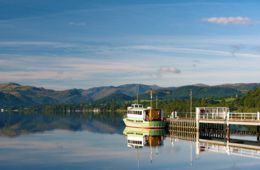 This lovely lake is surrounded by stunning mountain scenery to its south, softening to the gentle hills of the north. The lake is the second largest in England at seven and a half miles long, but is less than a mile across. It is also the third deepest English lake at 250 feet deep. It has three distinct bends giving it a dog's leg appearance. Ullswater is clear but deep, and in the deepest part lives a curious fish called the skelly, a sort of freshwater herring.

There are dramatic views from both sides of the lake, by foot or by vehicle. The small village at the foot of Ullswater, Glenridding, is a popular starting point for walkers and climbers going up Helvellyn, England's third highest mountain including Striding Edge and Swirral Edge. Further along the lake is Glencoyne Park. It was here that William and Dorothy Wordsworth were walking on 15 April 1802, when the location gave him the inspiration to write his most famous poem, 'Daffodils'. 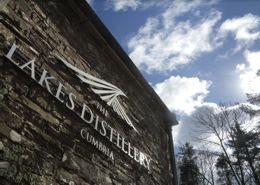 Close to Bassenthwaite Lake, surrounded by majestic Lakeland peaks and fells, nestled in woods and surrounded by rolling fields of vivid green. Housed in a beautifully renovated 1850s Victorian model farm, The Lakes Distillery has a range of facilities for visitors to enjoy.

Following a £9m investment and three years in development, The Lakes Distillery opened in December 2014 in the Lake District National Park with the vision of producing world class spirits that will be global brands recognised and respected around the world. 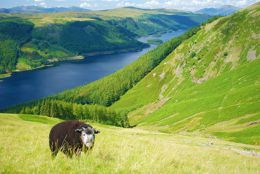 which was originally two smaller lakes, which were purchased by Manchester City Corporation Waterworks in 1889. The area was dammed with a dam whose greatest height is 104 feet, and the area became one vast reservoir. In the process, the settlements of Armboth and Wythburn were submerged.

This is the flattest of the mountain passes in the Lake District running down towards Grasmere. Dunmail Raise is also the name of a large cairn which stands on the top of the pass, on the central reservation between the two carriageways of the road. Legend has it that Dunmail, the last king of Cumberland, is buried beneath the cairn at Dunmail Raise after having been slain by the English in battle.

The village is on the river Rothay which flows into Grasmere (the body of water), which lies about 0.5 km to the south and is overlooked from the north-west by the rocky hill of Helm Crag, popularly known as The Lion and the Lamb or the Old Lady at the Piano. These names are derived from the shape of rock formations on its summit, depending on the side from which you view it.

The lake at Grasmere being one mile long, half a mile wide and 75 feet deep, would be an attractive and popular tourist area even without its Wordsworth connections. 'The most loveliest spot than man hath found' was Wordsworth's famous quote describing the area of Lakeland that he most loved. The small island in the middle of the lake was his favourite destination while he was staying at nearby Dove Cottage. 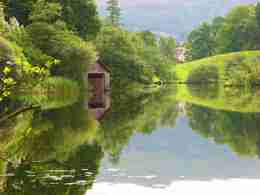 Rydal Water is one of the smallest lakes at three quarters of a mile long, quarter of a mile wide and with a depth of 55 feet, but it is very popular partly because of its Wordsworth connections. Steps lead up from the western end of the lake to 'Wordsworth's Seat', reputedly the poet's favourite viewpoint. Overlooking the lake is Nab Cottage, once home to Thomas Quincey and Hartley Coleridge, the son of Samuel Taylor Coleridge.

Check the availability for Whisky, Vodka, Gin and a Cruise