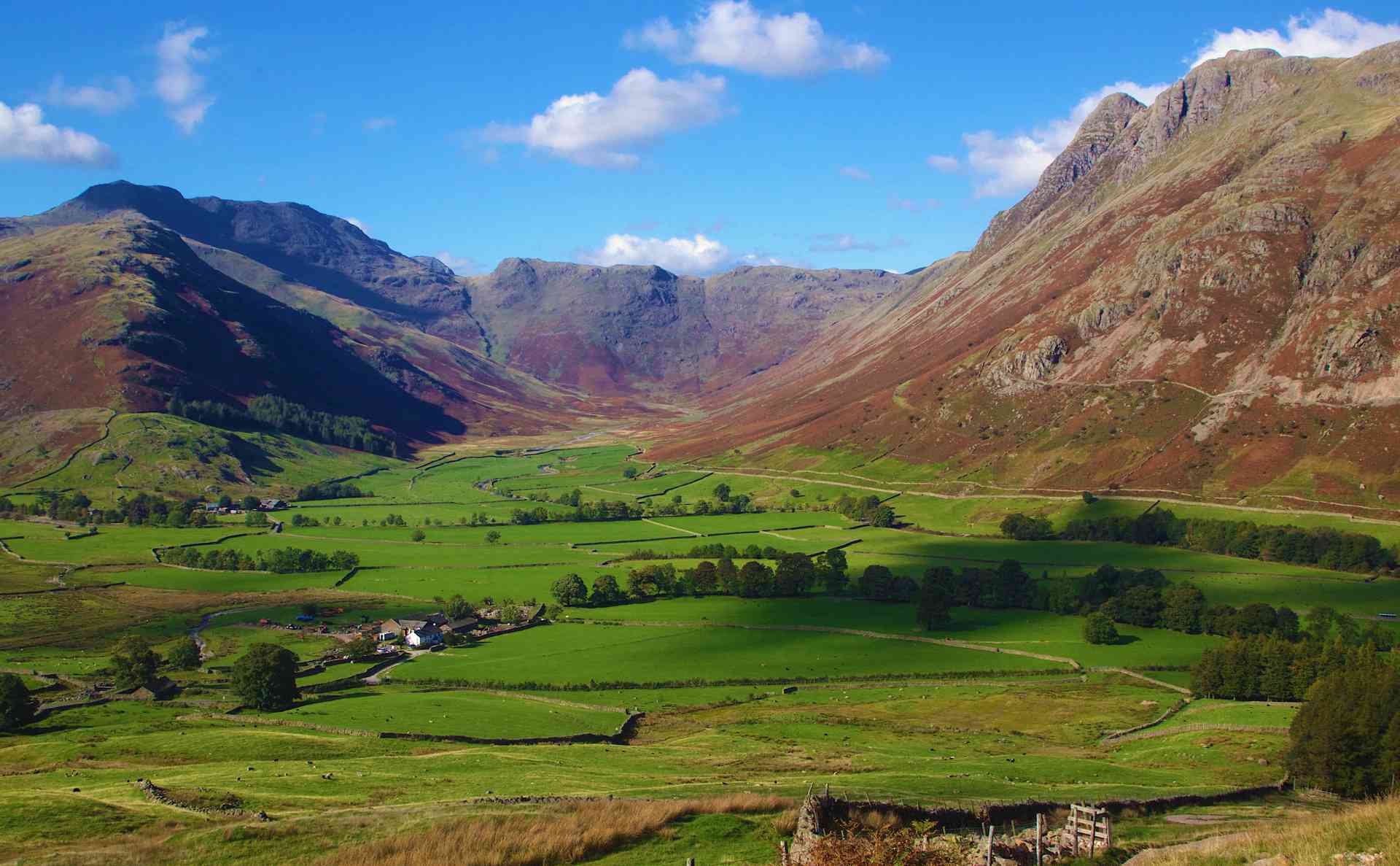 This half day tour will take you around the Coniston and Langdales area, full of history and heart stopping scenery in just one morning. This is one of our most popular tours and gets fully booked quickly so please book your seats early as we have limited places and dates available.

Your morning starts with a scenic drive through typical Lakeland countryside to "one of the most beautiful places in the Lake District", Tarn Hows. You would never guess that the scene before you is a man-made, stunning beauty spot. In Victorian times, a beck was dammed, creating the tarn you see today, while the Hows are the surrounding small, wooded hills. In 1929, Beatrix Potter bought this area as part of the vast Monk Coniston Estate and later left it all to the National Trust so that the farms and breathtaking countryside were preserved. You will have an opportunity to stop here and admire the view looking over to the Coniston hills and Langdale Pikes, which form the backdrop to this spectacular corner of the Lake District.

As we descend back down from the Tarn, the surrounding countryside opens up before us, dropping away from the road down the rolling hills towards the Yewdale Valley. Plunging into a wooded, mossy dell, we emerge back onto the main road at Monk Coniston sitting on the northern tip of Coniston Water. Pausing here, at the very edge of the lake for you to soak up the atmosphere and tranquillity, we then meander along the shore, climbing up to beautiful Brantwood, the former home of John Ruskin, the leading English art critic of the Victorian era, as well as an art patron, draughtsman, watercolourist, a prominent social thinker and philanthropist.

We linger at Brantwood long enough for you to take in the panoramic vista of the lake, overshadowed by Coniston Old Man opposite. Brantwood is the perfect spot for photos across the lake. Down below the house, a path snakes through a garden to the lakeshore jetty where you can walk out onto the lake for more amazing photo opportunities.

Looking across the lake, you will see the village of Coniston crouched at the foot of the fells. This is our next location and on arrival, your guide will take you on a short walking tour around the village pointing out all of the interesting features along the way. There is plenty of time to see the village and experience the local character of the area.

Moving on up the Yewdale Valley,you will see Yew Tree Farm, famous as a location in the film "Miss Potter". A little further on, beautiful Yew Tree Tarn in Yewdale is dominated by a stately clump of ancient yews and is set right next to the road. Like Tarn Hows, it is man-made by the landowner, James Marshall, who dammed Yewdale Beck at the southern end in the 1930's, and then stocked the tarn with trout.

We now leave this lowland area and head up into the fells and some staggering, sweeping scenery. Little Langdale is a hamlet of a few scattered stone houses and a pub in the Little Langdale valley. These few cottages and farms are separated by the Lingmoor Fells from Great Langdale and so we must take a narrow, twisting road up high onto the fells which looks down on some of the most breathtaking views in the Lake District. We pass by Blea Tarn, still on the narrow road which climbs steeply and turns backwards and forwards unfolding the scenery before us.

Over each summit in the road, new vistas unfold for us with spectacular views of the Langdale Pikes, a group of peaks on the northern side of the dale. From below, they appear as a sharp rocky ridge, though they are precipitous only on their southern side; to the north, the land sweeps gently to High Raise, the parent peak of the range. The Pikes themselves include (from west to east) Pike of Stickle, Loft Crag, Harrison Stickle and Pavey Ark. The only way to really appreciate this place is to see it in front of you, for yourself. However, as we move through the valley, there will be photo stops along the way.

The road now turns as we pass Great Langdale which is known to archaeologists as the source of a particular type of Neolithic polished stone axe head, created on the slopes of the Pike of Stickle and traded all over prehistoric Great Britain and Europe. Great Langdale is a huge U-shaped valley formed by glaciers which opens up to us as we descend back down from the fells. The valley also contains two villages, Chapel Stile and Elterwater, and as the road passes close by, we get a glimpse of the nearby lake through the trees. The mouth of the valley itself is located at Skelwith Bridge and as we pass through the village, we follow the meandering river Brathay back into Ambleside where we began our adventure.

Check the availability for Private Tour: Coniston and Langdales Half Day Tour